This activity was created as part of a Gratnells What’s In My Tray CPD workshop for primary science teachers to support practical work and delivery of the curriculum. It can be carried out as a stand-alone activity for students or combined with other activities from the session to form a STEM carousel. 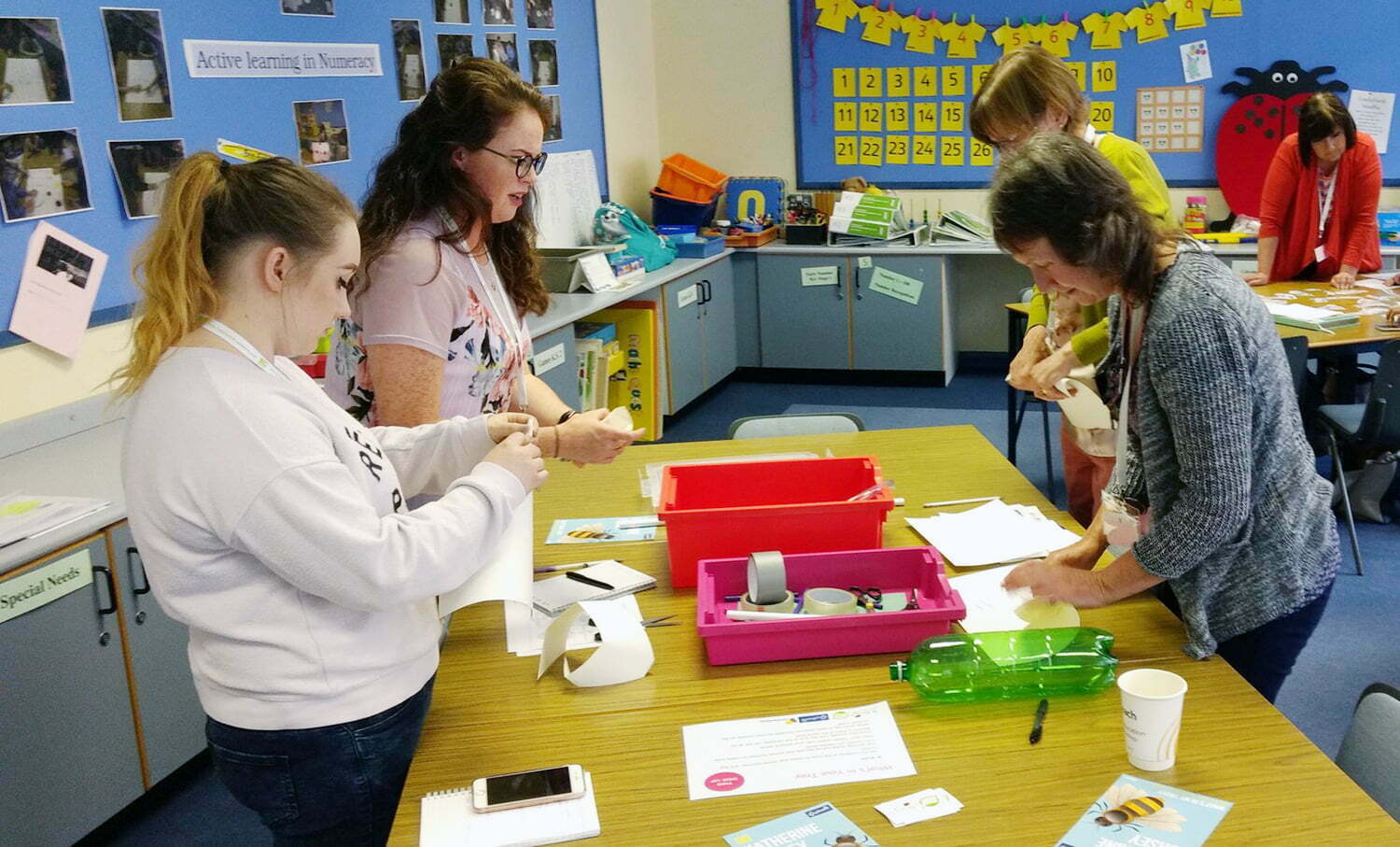 Kit for the launcher (sufficient to make one launcher):

Kit for the rockets (sufficient to make four rockets, one rocket per person):

Kit for measuring and targets (optional):

Tip: If you plan to have multiple teams taking part in this challenge, multiply the kit by the number of teams, use two trays to store the equipment for each team and use different coloured paper and trays for each team. This helps to organise everything and differentiate the rockets.

This activity also works for individuals or smaller teams, just reduce the amount of equipment provided to make the rockets accordingly and increase the amount of time allocated to complete it.

When all participants/teams have completed the activity, conduct the flight tests outside or in a large space. Each team needs to decide on one team member to hold the launch pipe and load the rockets and another to do the stomping (using one foot only).  All teams should set up their launchers in a line facing the same way. All teams then load their first rocket on to the launch pipe, give a countdown “3, 2, 1 blast off!” and simultaneously launch the rockets by stomping on the bottles. Repeat the loading, countdown and launch for the other three rockets.

Measure or observe the longest distance travelled by the rockets. Winning team (furthest rocket) gets 5 points, next team 4 points and so on.

Optional extra bonus points for accuracy could be made available for landing a rocket in a tray. If you would like to do this, spread a selection of empty Gratnells trays across the landing area for the teams to aim at before launch commences.

Tip: Use the images below as a guide for how to make your rocket and launcher or have a look at our Build A Rocket video for some examples.

What is happening? (from the Exploratorium)

Stomp rockets work because of air pressure. You are creating a high-pressure region in the bottle by squashing the air inside into a much smaller space when you stomp on it. At the other end of the launcher, the air in the pipe and paper rocket are at normal pressure.  Air naturally wants to move from high pressure to low pressure. The moving air is what exerts a force on the rocket and launches it. Increasing that force will make your rocket go higher/further. The change in velocity is proportional to how much force you apply and the time during which the force is applied. The change in velocity is inversely proportional to the mass of the rocket. Therefore, lighter rockets tend to go further/higher.

If you tried two different-length paper tubes for your experiments, you may have noticed that the longer rocket flew further/higher than the shorter one. This is because a long rocket body has more distance (length of rocket) over which the force of the air from the PVC pipe is applied, which increases the amount of time during which the force is applied. As the air expands into the pipe and rocket, however, the force decreases, so there is an optimal length of rocket where force and time are maximized.

Ask yourselves the following questions

Make a few more rockets to try out different designs, make predictions as to which will be the best and test them to see if they travel further. Use a tape measure or trundle wheel to record distance travelled during each test or place a labelled cone or flag where each rocket lands.

As with all Gratnells Learning Rooms What’s In My Tray activities, you should carry out your own risk assessment prior to undertaking any of the activities or demonstrations. In particular, when launching your rockets, please ensure you always launch away from other people and that nothing is obstructing the direction of travel.